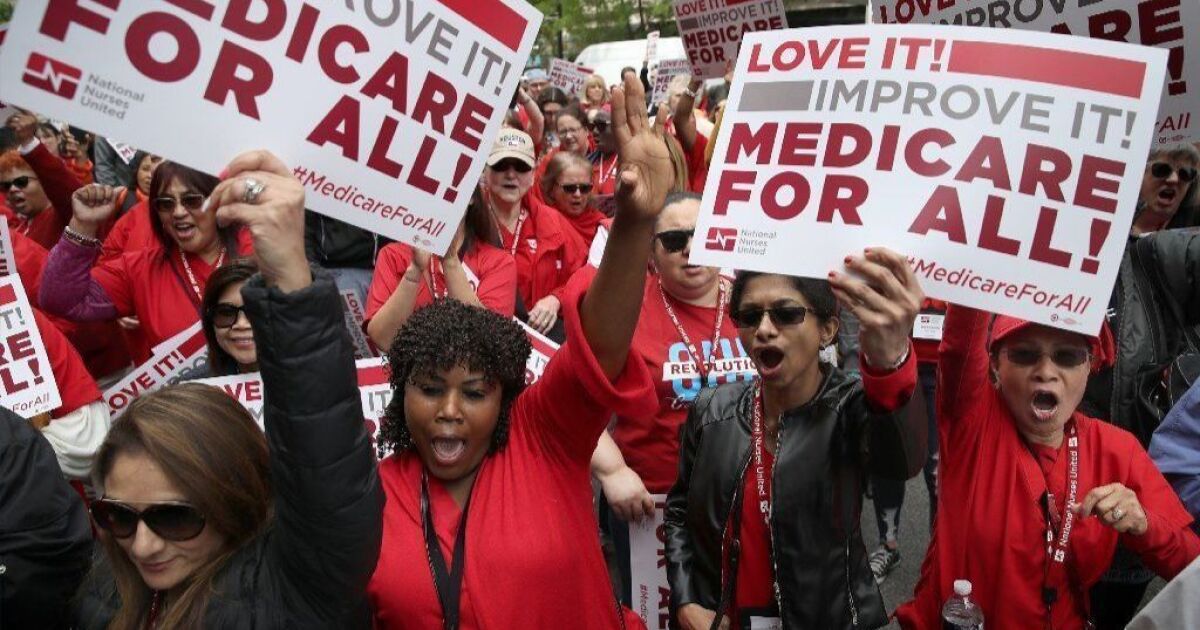 There’s a big reason why Americans pay about twice as much for healthcare as people in other developed countries, and it’s not corporate greed or political cowardice, although those are also factors.

This was highlighted for me by the dozens of emails I received in response to my column last week on “Medicare for all.” I laid out the case for why conservative claims of financial Armageddon were wrong and why a national single-payer insurance plan could save us trillions of dollars annually.

Gerald Kominski, a professor of health policy and management at UCLA, told me that once you clear away all the complicated policy brush, there’s one inescapable conclusion about Medicare for all.

“Most families would be better off,” he said, citing multiple studies showing that total out-of-pocket costs for most people would go down if current premiums, copays and deductibles were replaced by a tax.

This didn’t sit well with some readers.

“I don’t care that most families will be better off,” one commented. “I am strongly opposed to paying for someone else’s healthcare.”

I reached out and asked if he’d be willing to elaborate on his email. He said he’d speak with me if I agreed to shield him from social media scorn by not publishing his full name.

So I’ll refer to him only by his first name, which is David. He’s a 58-year-old “software professional” residing in San Diego County. He’s a registered Republican.

“I make a lot of money,” David told me. “I’m not ashamed to say that. I work really hard.”

He said one of his chief criticisms of proposed Medicare-for-all systems is that wealthier people such as himself almost certainly would pay more in the form of higher tax rates. America has had a progressive tax system since Abraham Lincoln was president.

“We’re not all in it together if we have different amounts of skin in the game,” David stressed. “Just because I make more money, why should I have to pay more?”

The bottom line, he said, is that it’s wrong to demand that he pay for a stranger’s well-being, particularly if that stranger, unlike David, doesn’t appreciate “the value of a dollar and the value of hard work.”

First of all, I appreciate David’s feedback and his views on the issue. He speaks for possibly millions of like-minded Americans.

And I understand where he and others are coming from. Decent healthcare is hard enough to obtain for yourself and your family. Why should you also bear responsibility for other people’s coverage?

The answer is that none of us are alone in this world. We are members of a society, and that society’s welfare is everyone’s concern.

The underlying principle is the same. In a civilized society, we look out for one another.

And if such high-minded rhetoric doesn’t move you, there’s always the economic argument. Insurance is more accessible and more affordable when common risks are shared by the greatest number of people.

“If everyone pays for health insurance, the cost goes down,” said Jason Doctor, chairman of the Department of Health Policy and Management at USC’s Price School of Public Policy.

Jason Abaluck, an associate professor of economics at Yale University, said it would be fine and dandy for people to self-insure by setting money aside for proverbial rainy days.

“But because getting sick can cost hundreds of thousands of dollars, it’s not feasible for most people to self-insure by saving,” he said. “This means that some kind of risk pooling is required.”

And once we acknowledge that, the question becomes: How can we pool healthcare risk as efficiently and effectively as possible?

By getting everyone in the pool.

“We all pay in a fixed amount each year so that if we do get sick, we don’t have to sell our house and car to obtain medical care,” Abaluck said. “Doing this potentially makes everyone better off relative to a world with no risk pooling because everyone could get very sick.”

I’m frequently asked by conservatives why they should help pay for the thousands of dollars in medical bills I run up annually because of my Type 1 diabetes. Why is that their problem?

To which I reply that they’re helping defray my costs in the exact same way I’ll be there for them if, God forbid, they get cancer or have a heart attack.

“You may be paying for others now, when they need care, but they are paying for you when you need care,” said Keith Joiner, a professor of medicine, economics and health promotions science at the University of Arizona.

Yet to some people — mainly conservatives — health insurance is different from other forms of coverage. It’s everyone for themselves.

That’s the very definition of selfish. Here’s the Merriam-Webster dictionary’s entry for the word:

1: Concerned excessively or exclusively with oneself: seeking or concentrating on one’s own advantage, pleasure or well-being without regard for others. 2: Arising from concern with one’s own welfare or advantage in disregard of others.

That may be defensible behavior in some circumstances — taking the last cookie on a tray, for instance. But when it comes to healthcare, it’s bad public policy, bad economics and bad for society overall.

To be sure, we live in selfish times. Just look at all those people who text while driving or during movies, or who throw litter or cigarette butts on the sidewalk, or who are incapable of seeing anyone else’s point of view (but are exceedingly happy to voice their own opinions).

“Social media” could just as easily be dubbed “selfish media.”

As I wrote last week — and John Oliver said two days later on his HBO show — Medicare for all addresses much of what’s wrong with our healthcare system. It covers everyone. It cuts costs. It eliminates wasteful practices that inflate our medical bills.

Yes, the details are tricky. Nothing about transforming the U.S. healthcare system would be easy.

We’re talking about getting the biggest bang for our insurance dollars, which means managing risk prudently.

This can take the form of the government being the sole primary insurance provider, such as in Britain and Canada, or the government playing an active role in regulating comprehensive and affordable private health plans, as in Germany and France.

What it doesn’t mean is turning a blind eye to others just because you have yours.

Here’s the thing: Unless you’re from Krypton, there’s a 100% chance you will require medical attention at some point in the future. If you’re lucky, it will be for something relatively minor.

If you’re like most people, though, it’s probable you or a loved one will face an illness or injury that could be devastating to your financial well-being.

Under Medicare for all, none of us would be alone in such circumstances. We’d have each other’s back.

That’s the exact opposite of selfishness.

And it’s a profoundly better way to live.